THE RAVEN SITS – a poem by Mark Vernon Thomas, illustrated by Helen Morley of Wigtown Press.  Mark Vernon Thomas is a poet living deep in the Machars, South-west Scotland. He has been published in a number of magazines internationally, is a Federation of (Scottish) Writers 2020 prize winner and is included among the Champions 2020 poets on the Scottish Poetry Library website. He is very fond of cats.

This entirely hand printed artist book (or chapbook) is illustrated with acrylic engravings developed from intuitively made mono-prints and the text is hand printed with moveable metal type, printed on the Cropper Minerva printing press. The text is printed in black ink on dark blue card as a response to the mysterious opening and closing of the poem and its darkness, which similarly demands close scrutiny.
​
It is set in 12 and 14pt Baskerville fount on 170gsm deckle edged Zerkall smooth paper, is hand sewn, signed by the poet and artist, and is limited to 50 copies. The internal print measures approximately 76x25cm and is £40 including free UK P&P. 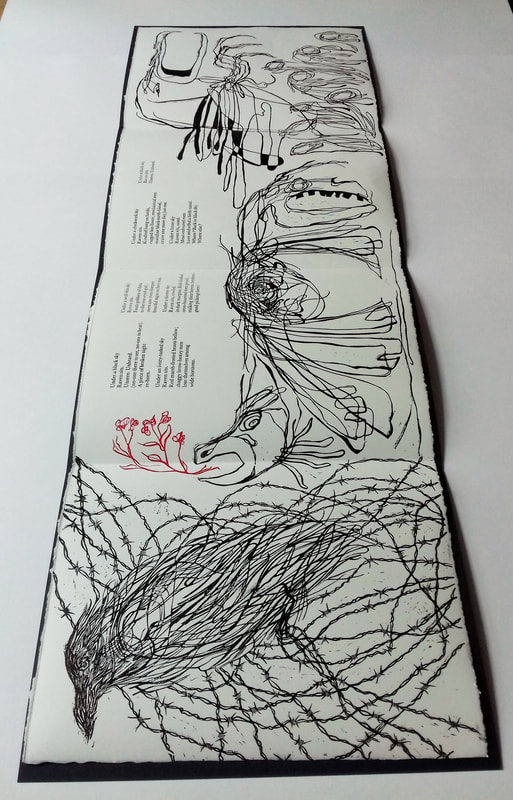 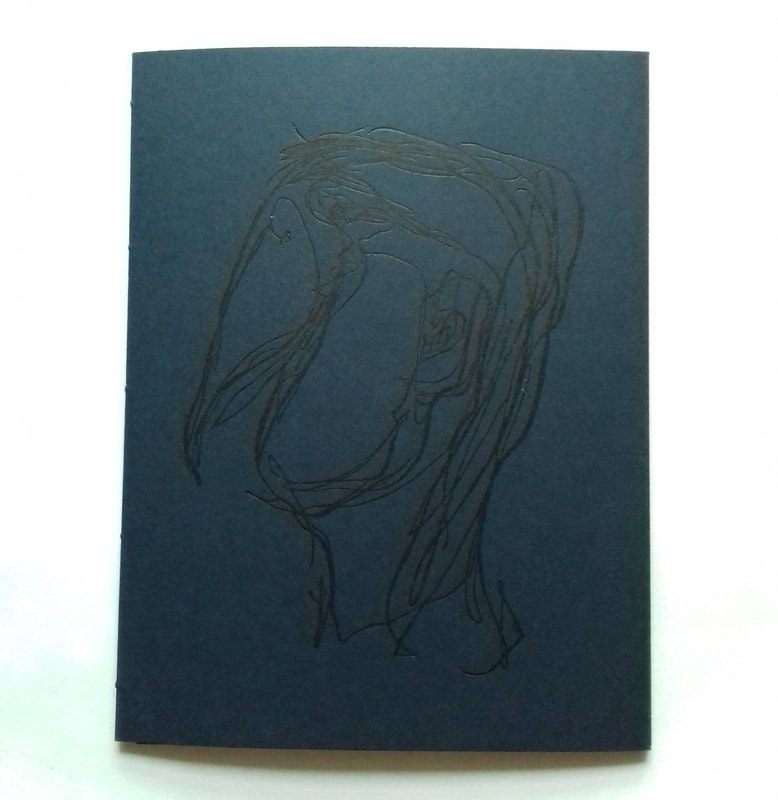 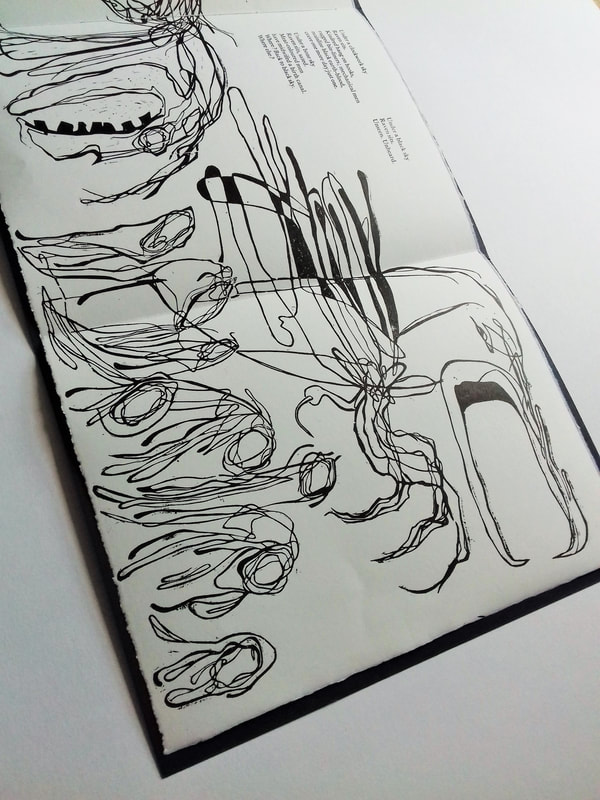 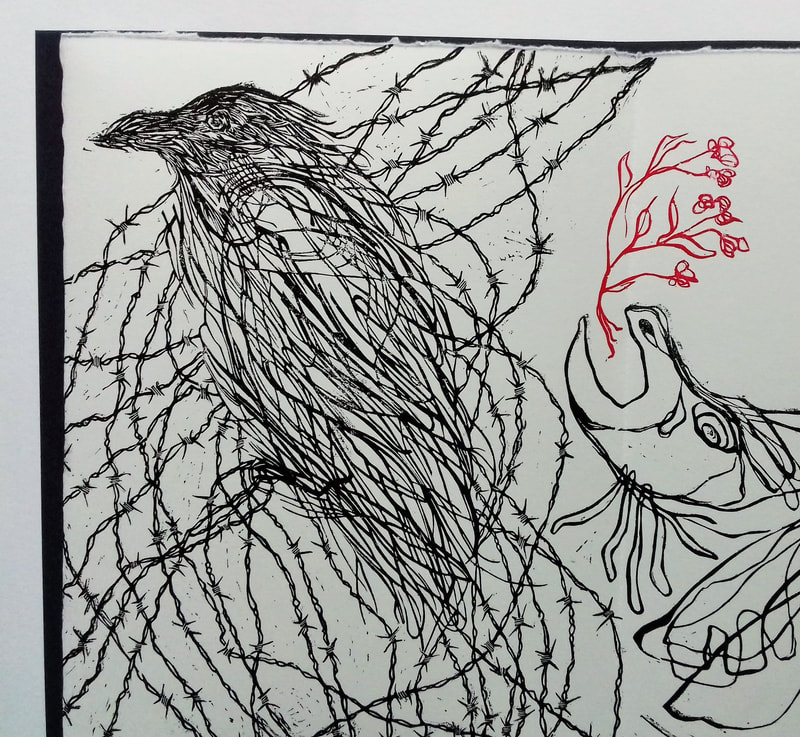 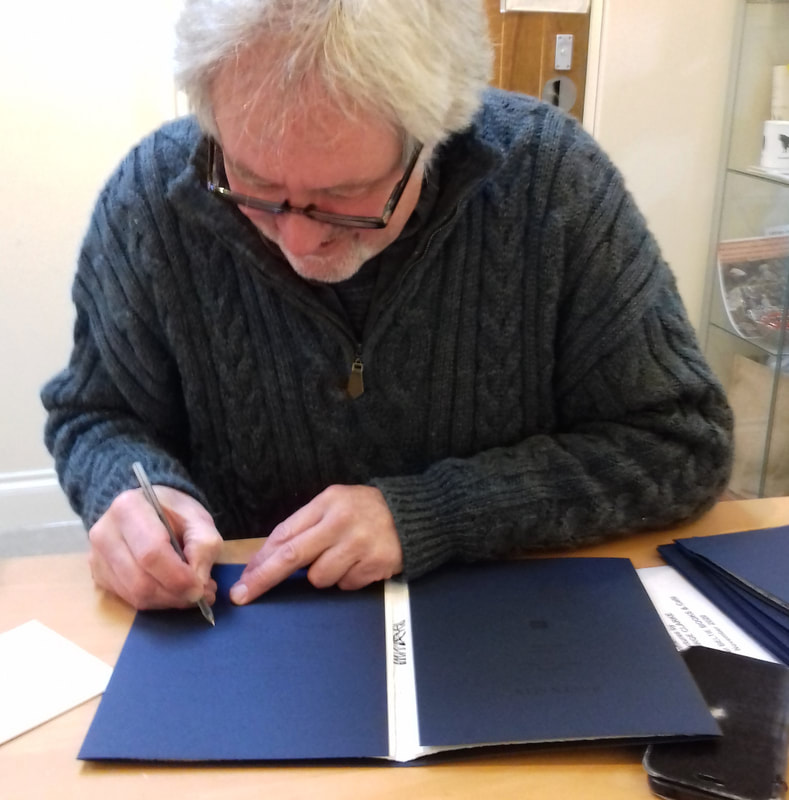 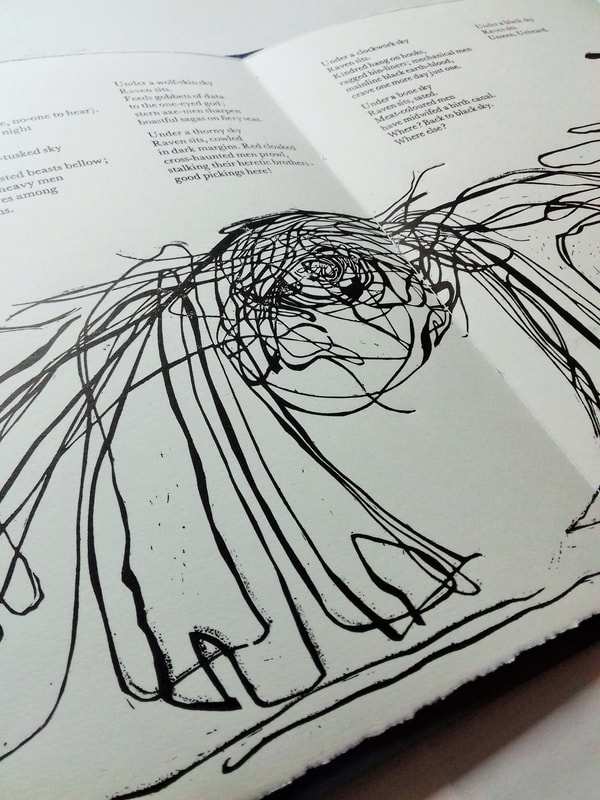 POEM BY MARY WALLACE.  100% of the sale of this work goes to Cancer Research UK.  My dear friend and poet Mary Wallace is walking 400km in 80 days to raise funds for this charity, and I have put her poem with an acrylic engraving to make this broadsheet.

It is limited to an edition of 25 copies signed by us both, and is printed on a quarter sheet of Zerkall paper using moveable metal type, 36pt Bembo Italic and printed on an Adana printing press.  The broadsheet will be sent to you rolled in a recyclable cellophane wrapper in a card tube.  It is priced at £25 including free UK postage. 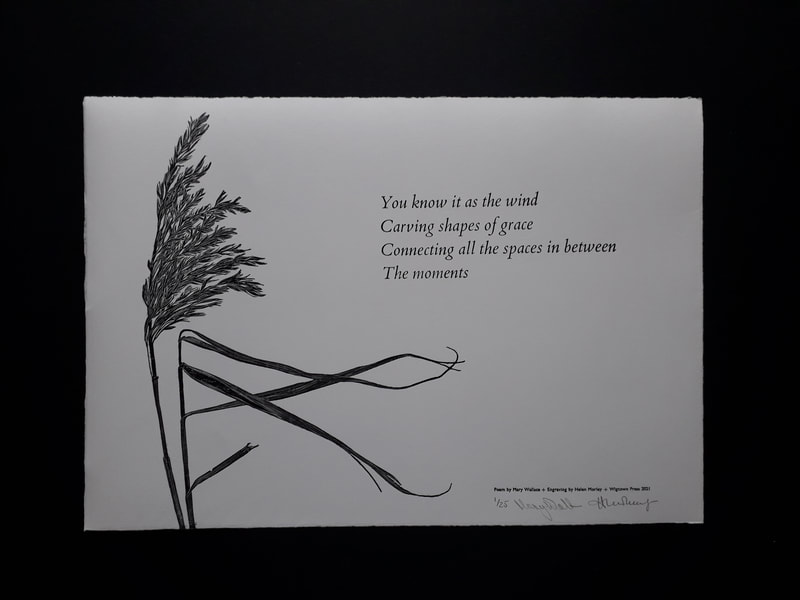 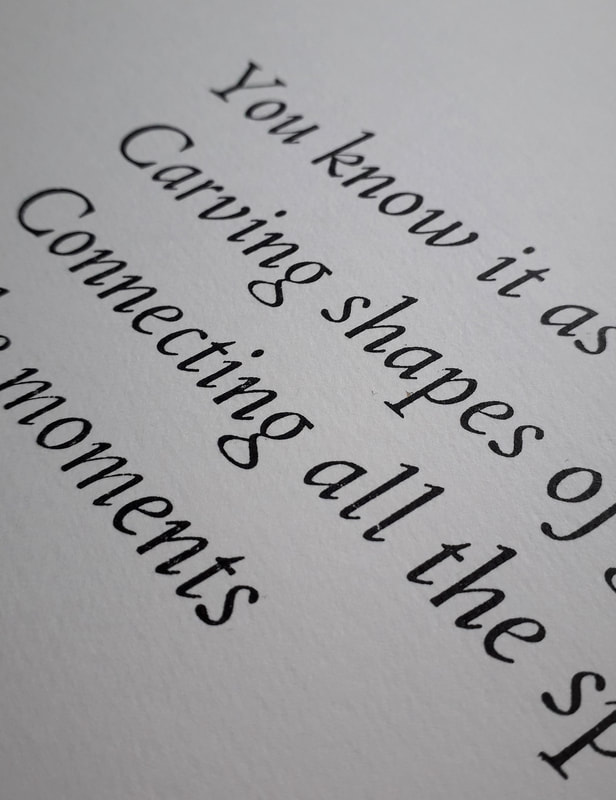 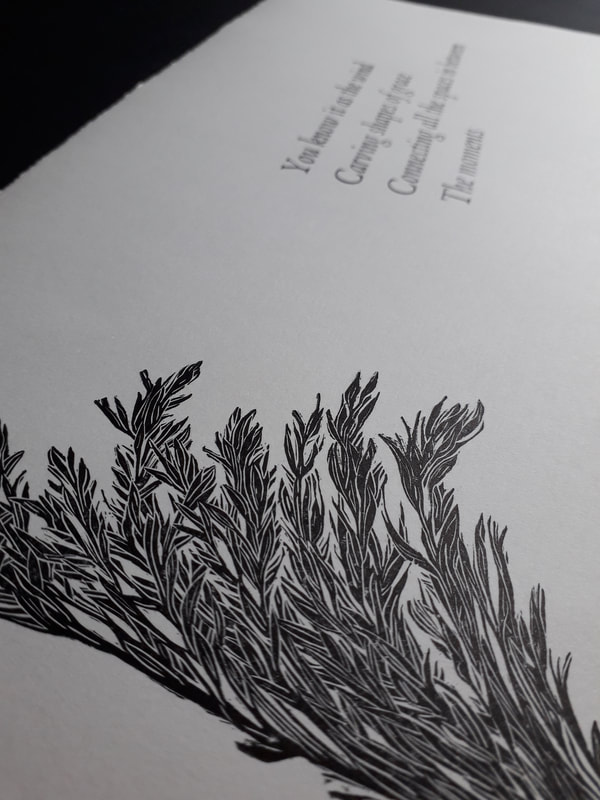 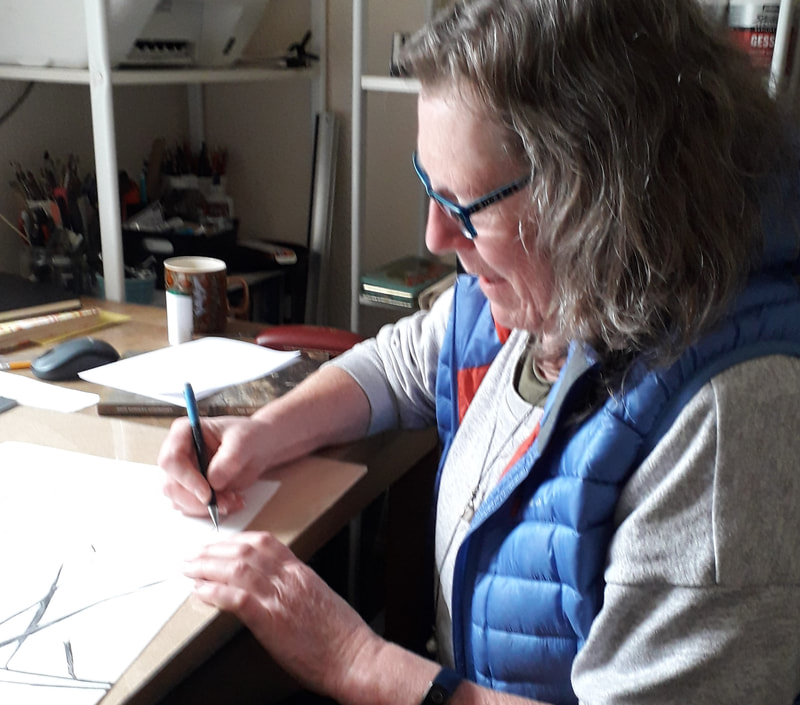 ​WHAT I BELIEVE - is a collection of poems, quotes and some of my own writing; it is a love letter, a meditation.  The large images are all hand carved multi block lino prints made on the bottlejack press.

See a little film of the book here on my Facebook page.

The book measures 28 by 36cm and is hardback in printed wrapper and book cloth, hand bound on 24 pages of heavy white cartridge paper and two double sided marbled end papers.  The text is all hand carved and is a limited edition of 75 copies at £200 each including UK postage.
​
​SOLD OUT 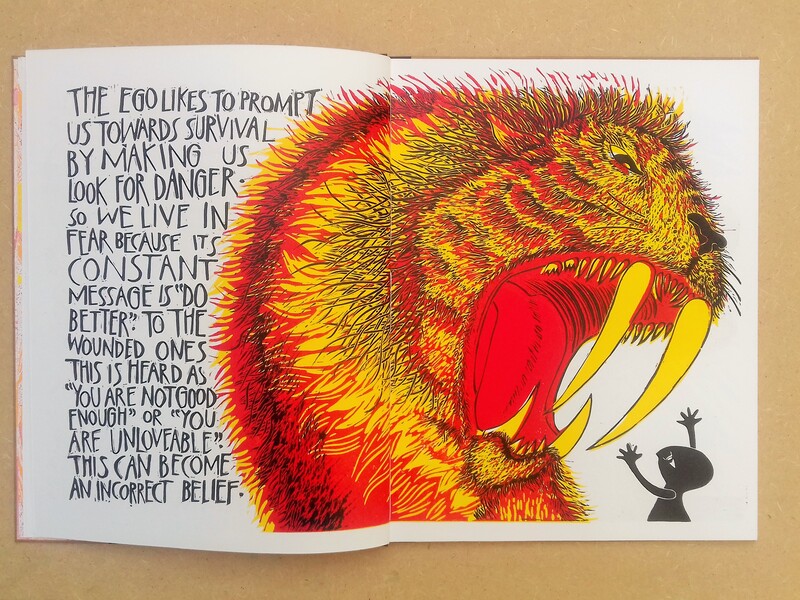 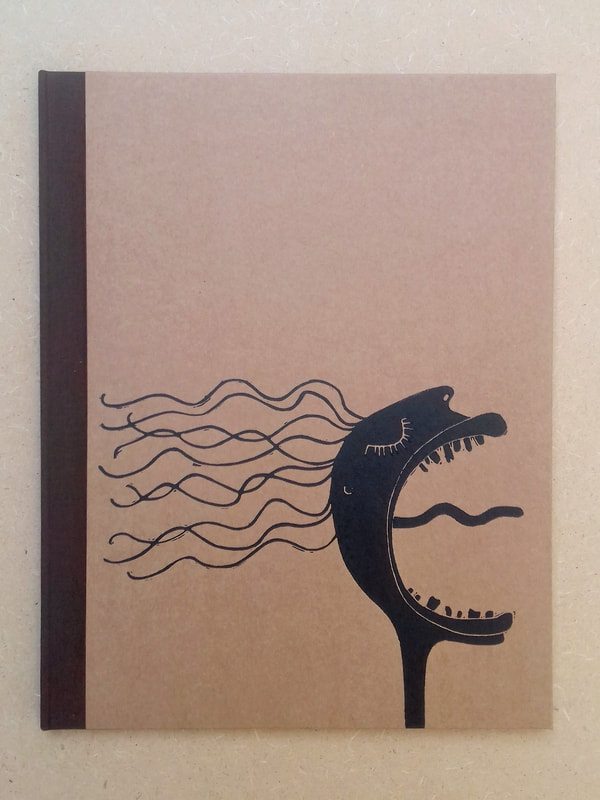 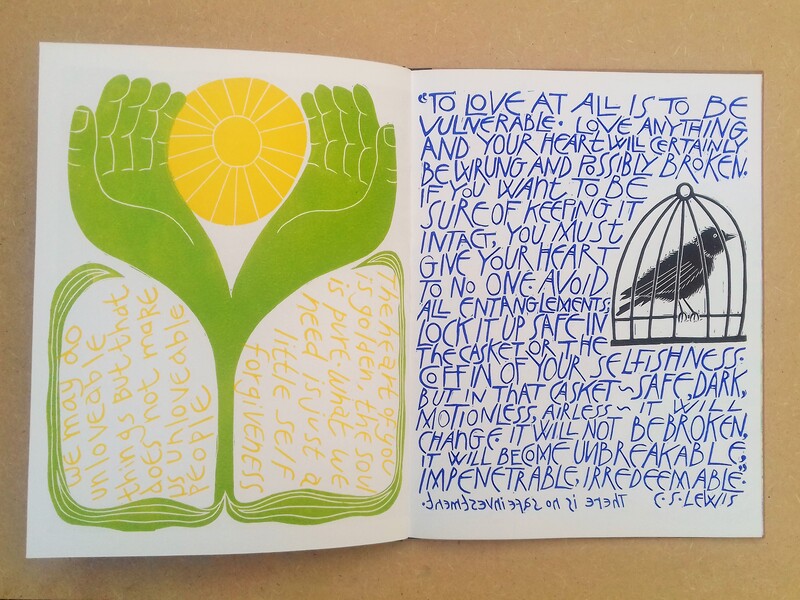 THE DESIDERATA - a prose poem written by Max Ehrmann in the 1920's, hand composited with metal type and illustrated with ten acrylic engravings of some of the native wild plants near my home in Galloway, Scotland.  The images were designed from very quick continuous line drawings made on the spot, of the few plants that survived the Council mower in July 2020 during the Corona virus emergency.  This is my first letterpress book and launches Wigtown Press and my newly restored Cropper Minerva.

The hardback book measures 12.5 by 10.5cm with printed wrapper.  It is hand bound and printed on 12 pages of off-white cartridge paper in 14pt Baskerville.  It is an edition of 50 copies at £50 each including UK postage and prospectus. 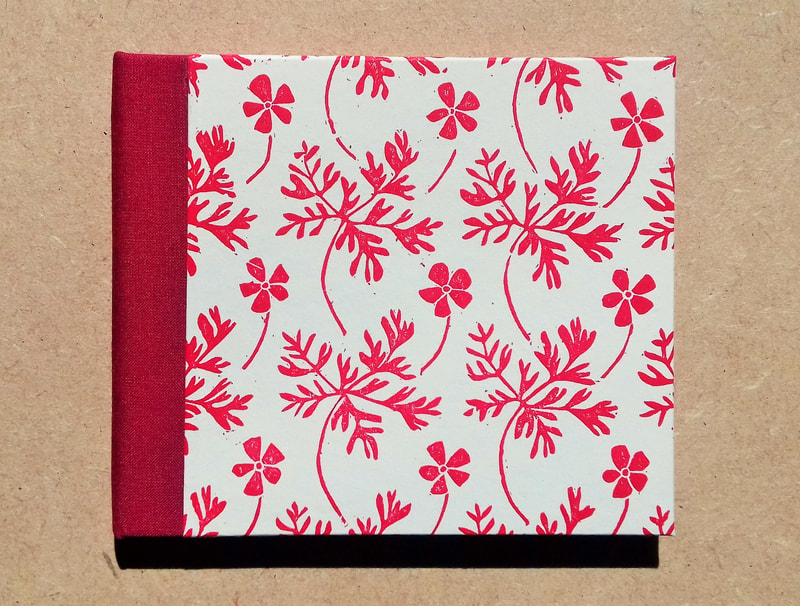 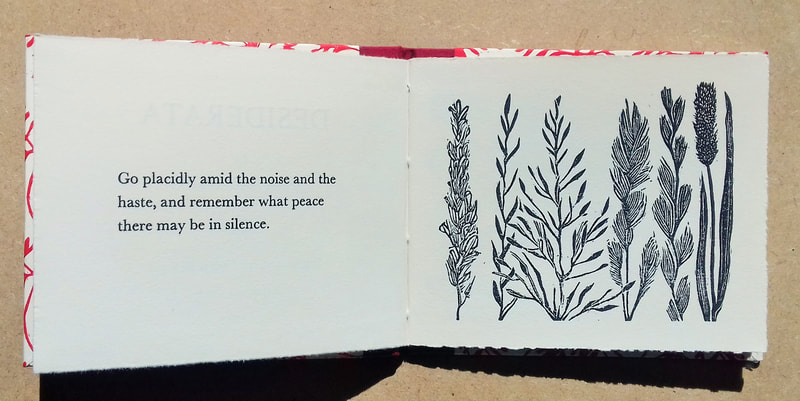 THIS WORLD, OUR HOME - is my first broadsheet.  The acrylic engraving was printed on my Dad-made Austin Seven intaglio press, the fount (my biggest block yet) was printed on the  Cropper press, and the red text on the bottle-jack press! The tradition of broadsheets or broadsides were the forerunner to today's press media, beginning as street literature sold on street corners, in pubs and at fairs by pedlars, hawkers and ne'er-do-wells. Their content may include bawdy song, news of sensational murders, religious texts, fairy stories or seditious agitations, but this is a collection of quotes by John Muir, a good Scottish man who went on to create the first national parks of America and was one of the pioneers of conservation. I fell in love with his words as a young volunteer in the nature reserves of Kent 30 years ago. 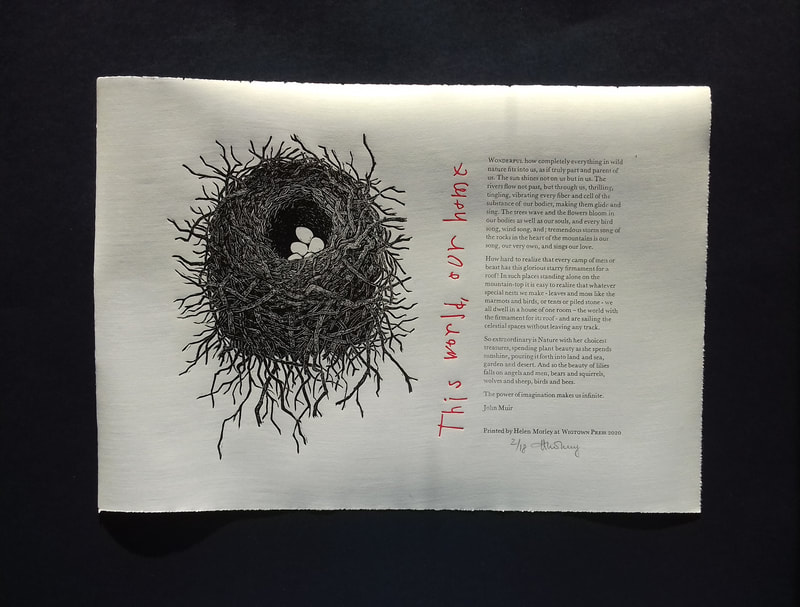 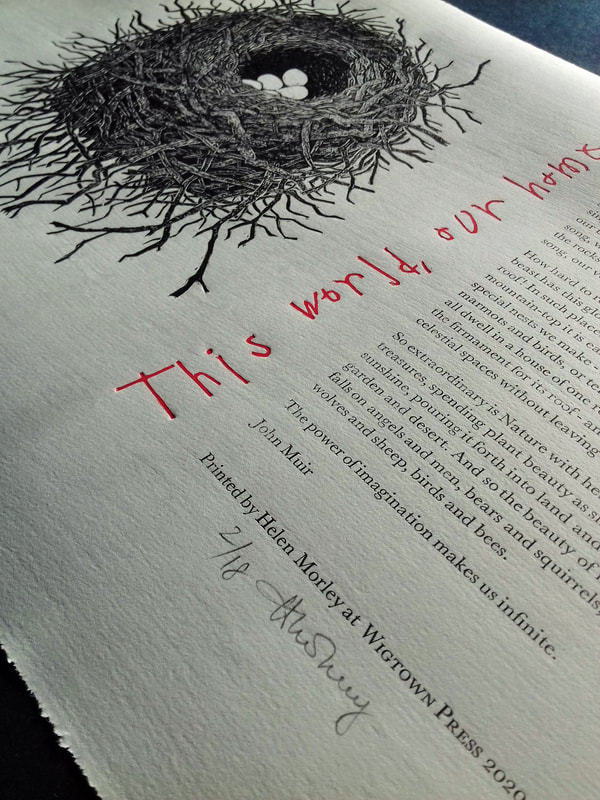 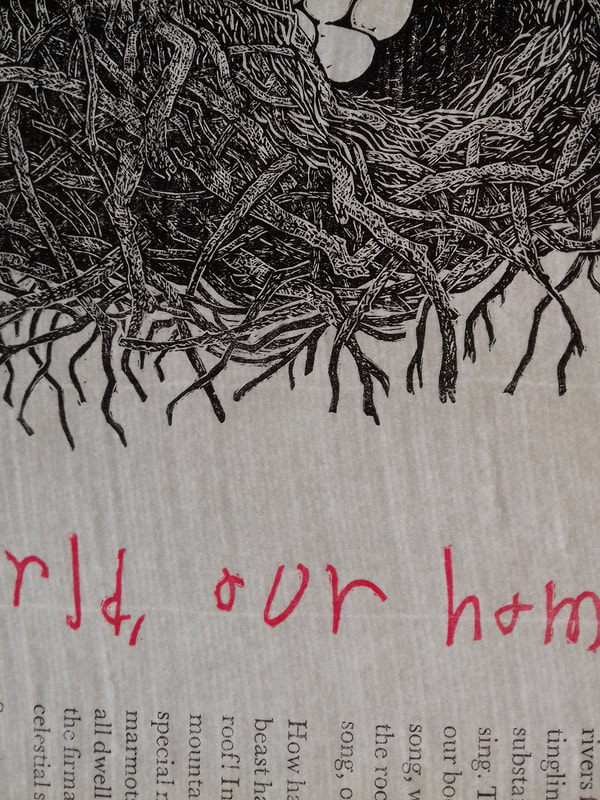 OUR COMMON HUMANITY - this was my first attempt at letterpress printing, illustrated with lino blocks and part of a six month project and exhibition funded by the Visual Artist and Craft Maker Awards - South of Scotland 2018-9 in partnership with Creative Scotland. (July 2019.)
​
A chapbook is a form of street literature or folk art that was popular between the 15th and 18th century and largely disappeared when newspapers became common. They were also discouraged by the authorities who feared their ungodly messages, particularly the Scottish churches.  They were cheap and often anonymous publications between four and twenty pages with often crude woodcut illustrations, and were once sold in their millions.  They were hawked door to door and at markets and fairs by itinerants and tinkers to the working folk who could not afford books, and comprised of stories, information, agitation, traditional songs, poems and oral histories.  They were often read out loud in homes and alehouses to those that could not read and were a vital way to disseminate popular culture particularly in remote rural areas.. 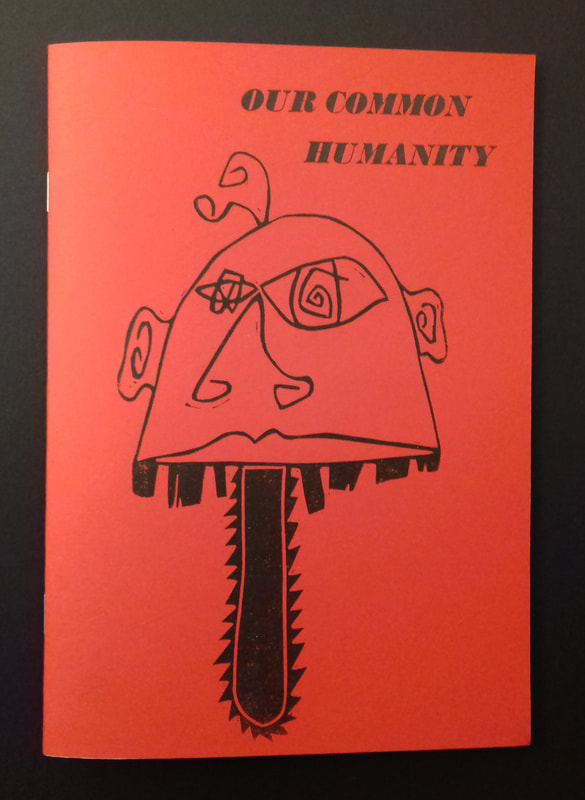 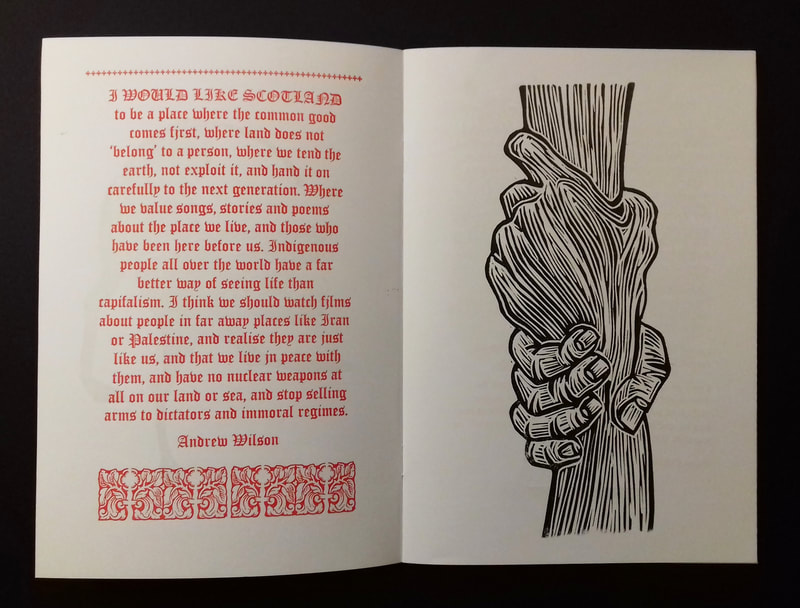 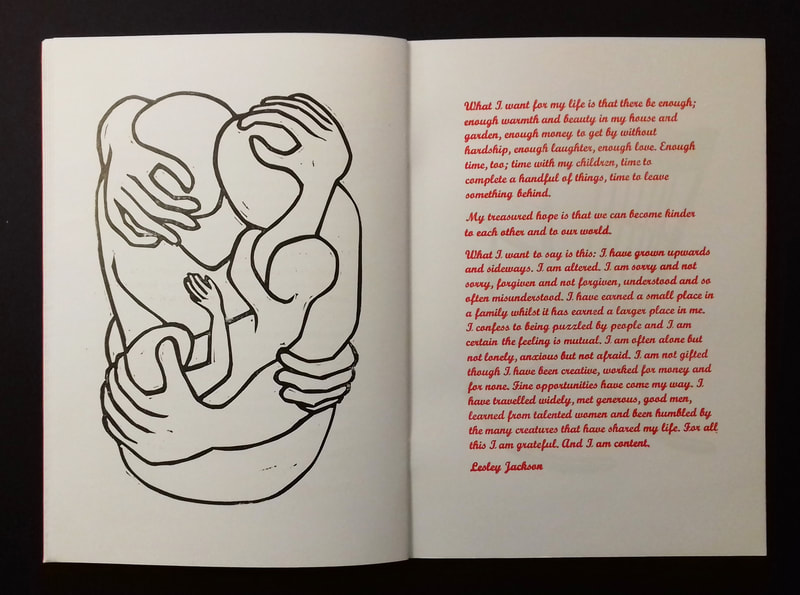 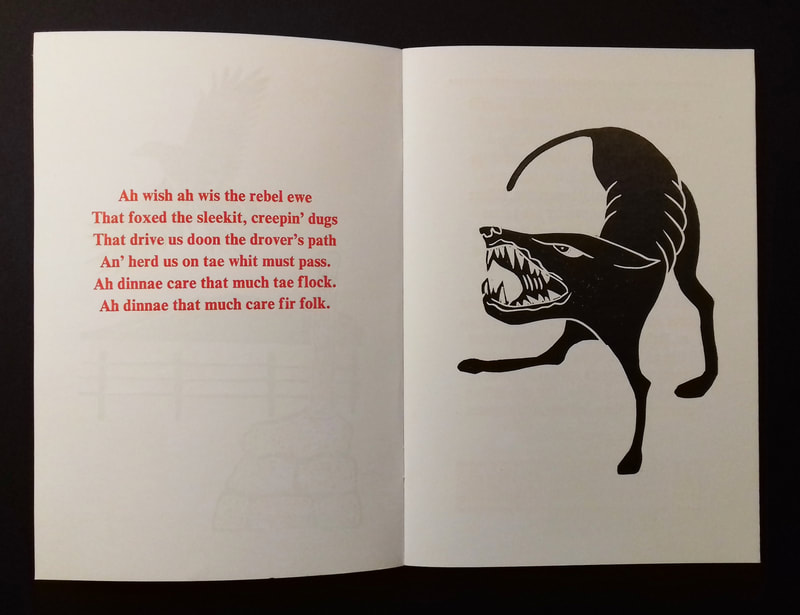 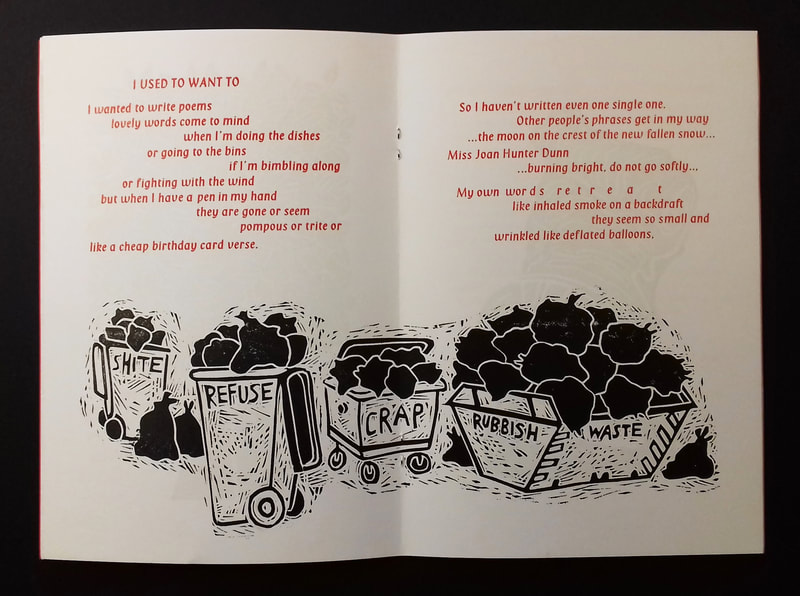 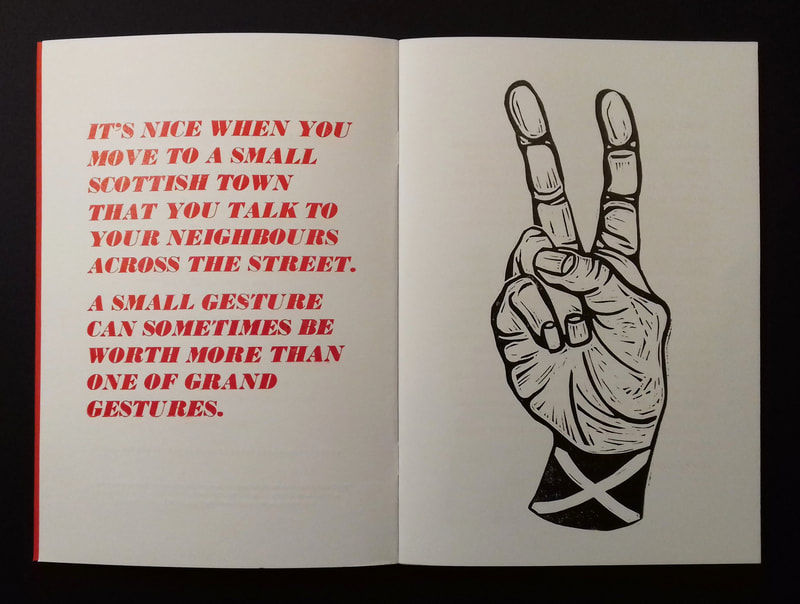