It has long been a dream to print with moveable metal type, and by great good fortune and serendipity in October 2019, I became the latest custodian of a Cropper Minerva press built by HS Cropper & Co model number 3634, nicknamed 'Minnie'.  In order to accommodate her, I had to move house and then find some good friends to shift it, and restoration began in January 2020.

As yet I have not discovered the date of her production, but the Patent number 2403 was traced via the British Library who sent me a copy of the Patent, which includes the drawings for the first model.  HS Cropper and Co of Nottingham began its manufacture in 1867 but went broke in 1892 and these drawings do not show a throw off bar (which my machine has) so presumably it is a later model, perhaps 1880's.

I don't know much about Minnie other than she was working for a long time in Glasgow.  So many presses were scrapped in the 1970's she was lucky to be spared but probably hasn't worked since then and certainly spent some time sitting in a barn.

I bought her knowing almost nothing about letterpress printing, and with zero experience in engineering, metalwork or presses, and was extremely lucky that she turned out to be 'restorable' and did not have too many parts missing.  I was also extremely fortunate to find a small community of knowledgeable friends, printers and restorers on Instagram and the British Printing Society who were astonishingly generous and supportive, although some have since admitted that they didn't think it likely to succeed.

Minnie is a little odd, in that the flywheel is on the right instead of the left.  As I have never used a press before, it makes little difference to me although it may confuse more experienced printers.  More troubling was her former enslavement to an electric engine, long disconnected.  This meant I had to 'unconvert' her back to analogue and make some other missing parts: a treadle bar, a throw-off bar, gripper assembly and some connection nuts.  The drive gear has been irreversibly 'improved' and I had to send that to my Dad for some major attention on a lathe.  He was also able to make missing nuts, bolts and washers; somehow decoding my terrible metric drawings to imperial (I have dyscalculia and have never used digital callipers or thread gauges before) whilst living 400 miles apart and during the first Covid lockdown.

It was very difficult to design missing bars as you can't measure something that is not there, so I tracked down all the Cropper owners I could find in the world (only a very few) and they kindly sent me measurements and photos.  But then I realised they were probably different models so I had to design from scratch anyway.  None of the blacksmiths in the region had the courage to even quote for it, but eventually I found an engineer willing to try and with a little adjustment, the new bars seemed to fit.  Another great stroke of luck was finding the very clever people of Press Parts who made the bespoke rollers.

I stripped the press down as much as I could, unseized the throw off axle, cut out and remade the chase catch, took off the parts from the engine, de-rusted everything that seemed wise, cleaned, greased and painted it.  It wasn't until it was in dozens of bits around the house that I realised how it was meant to operate.  It wasn't until it was completely reassembled that I found out if it would ever work again.  It does! 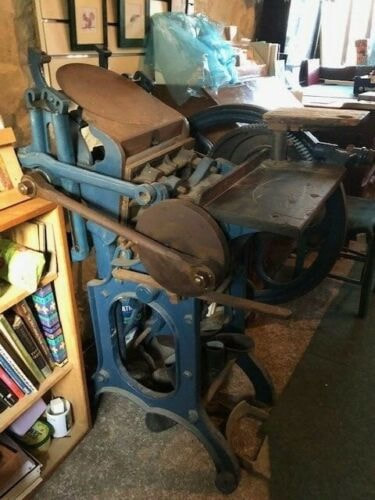 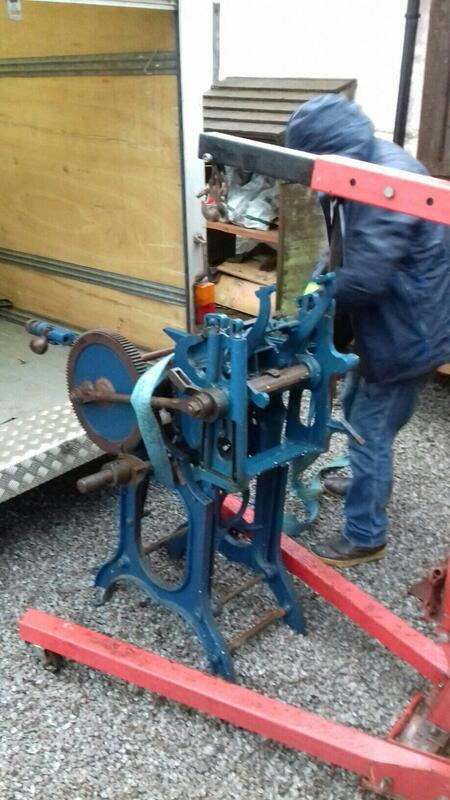 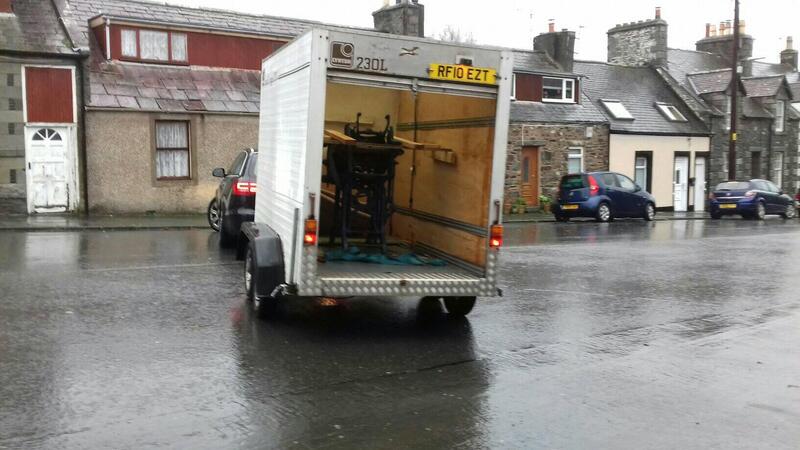 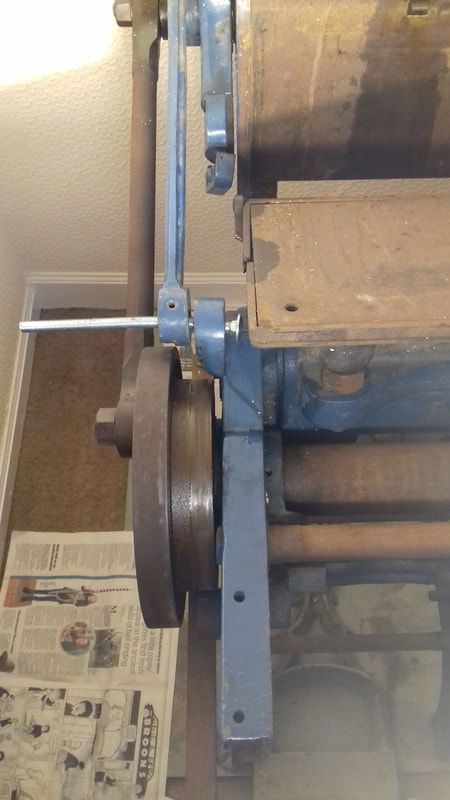 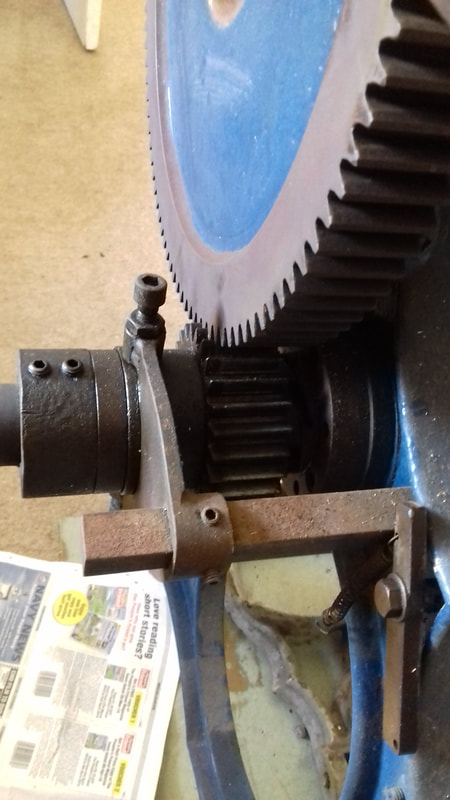 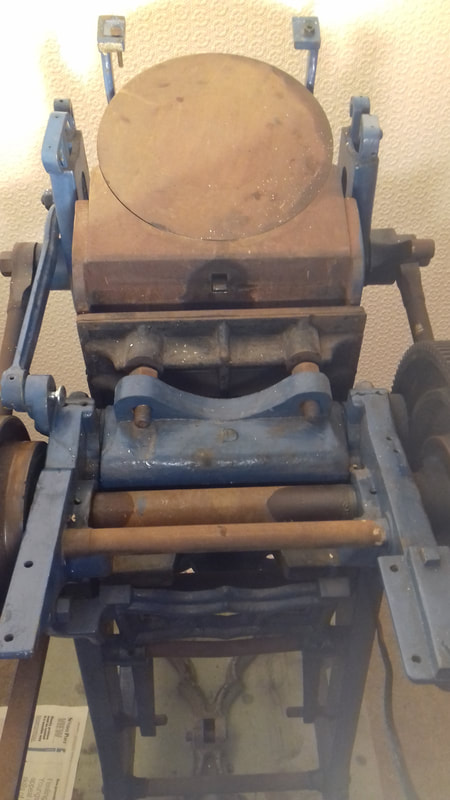 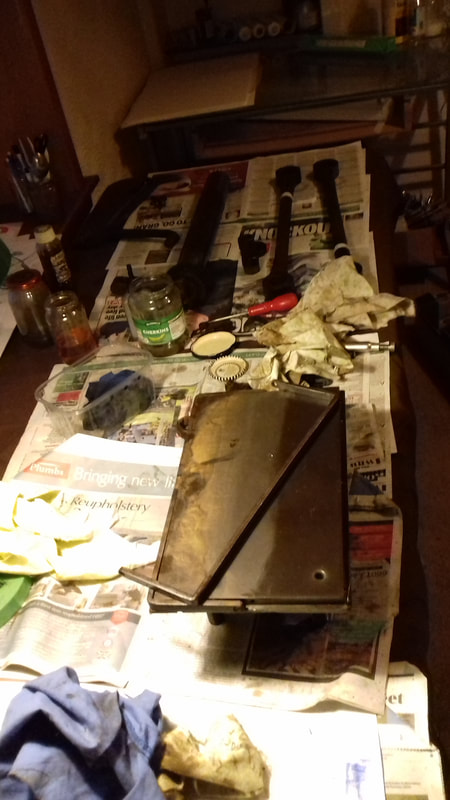 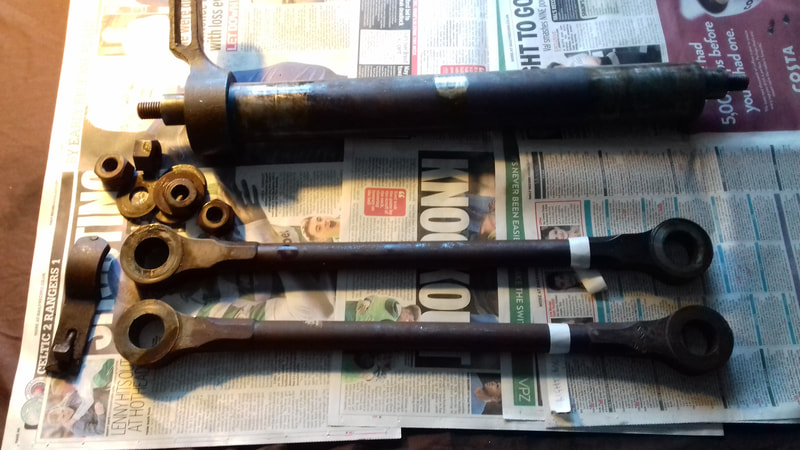 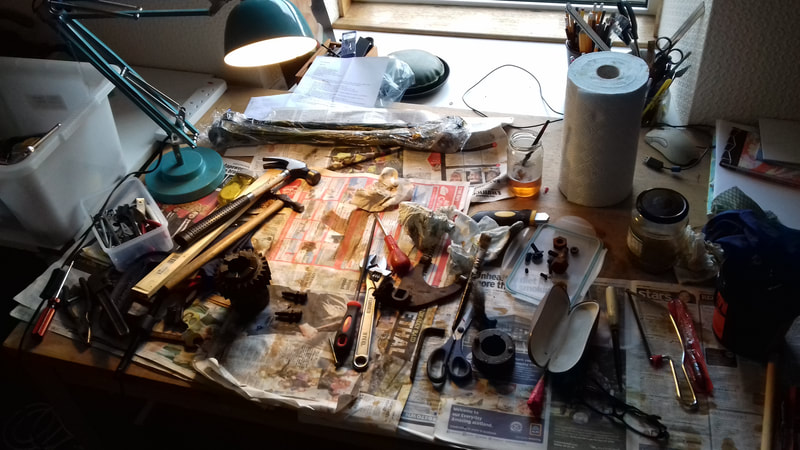 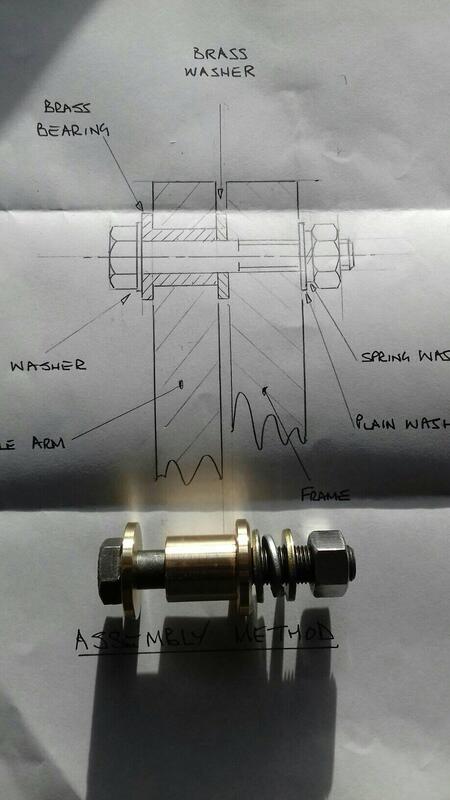 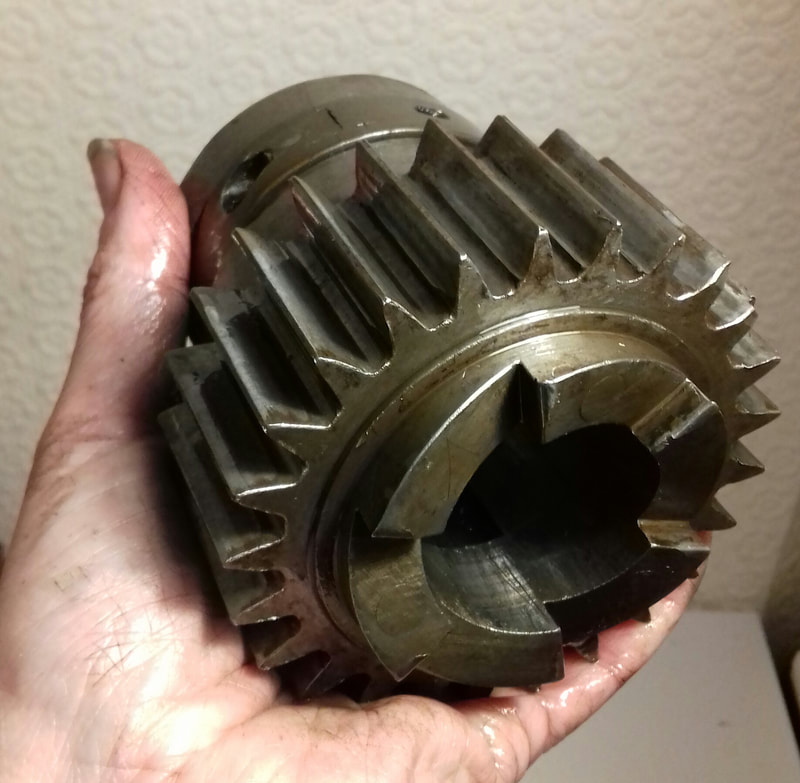 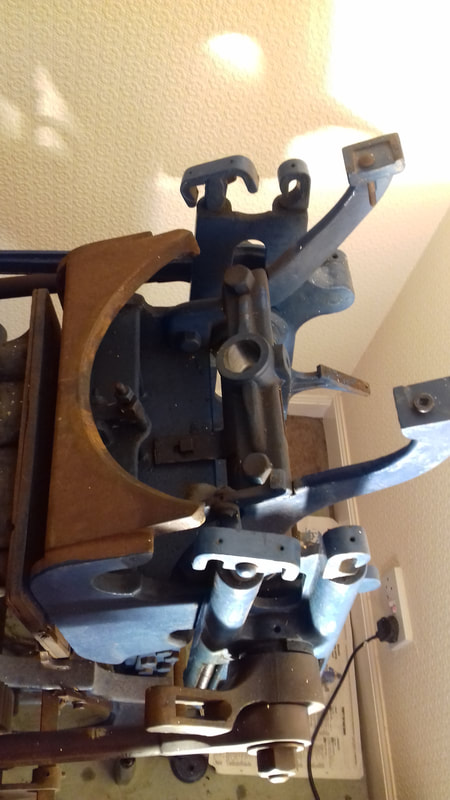 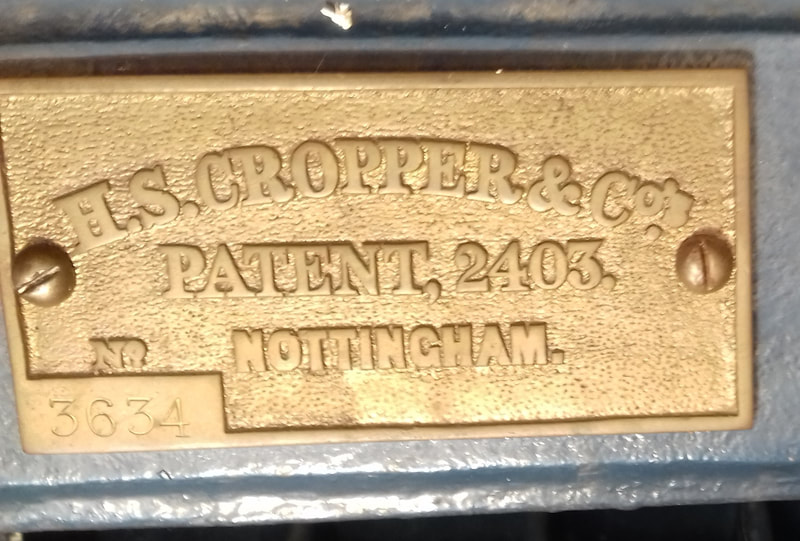 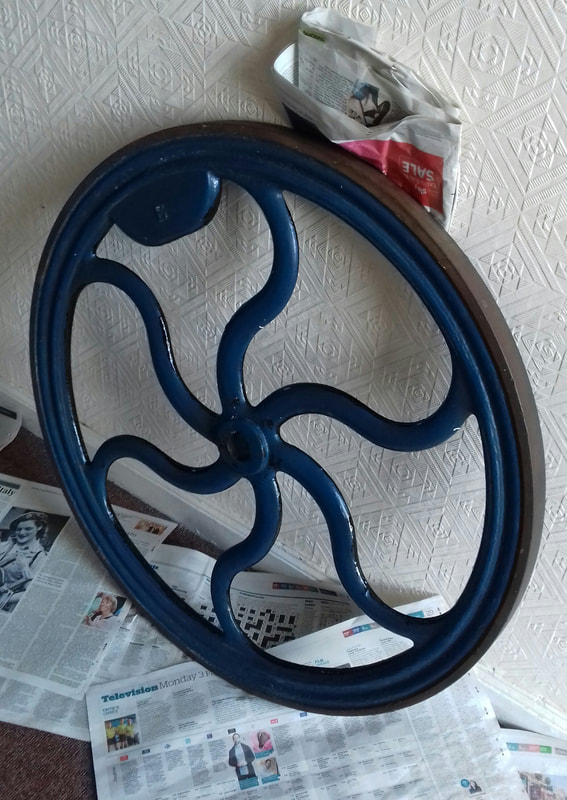 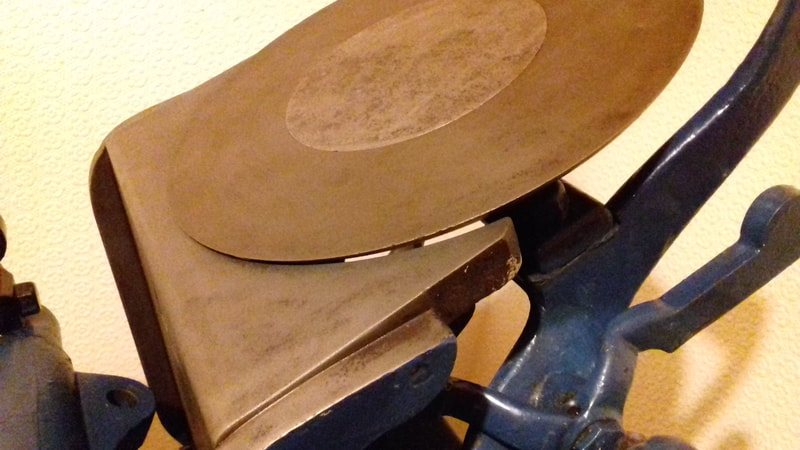 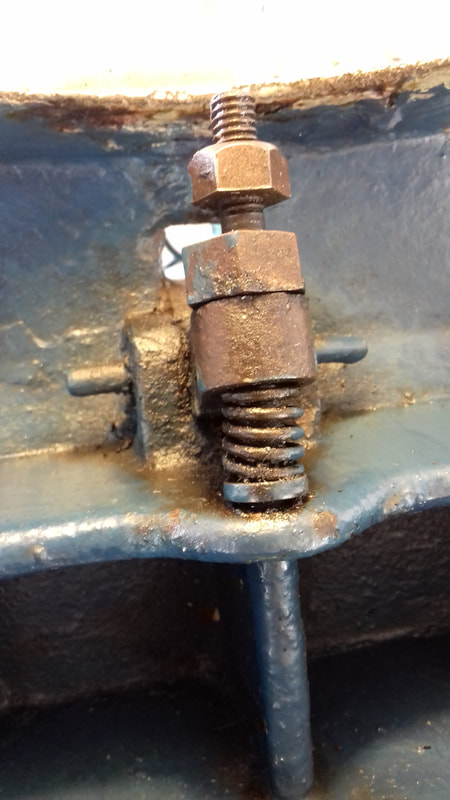 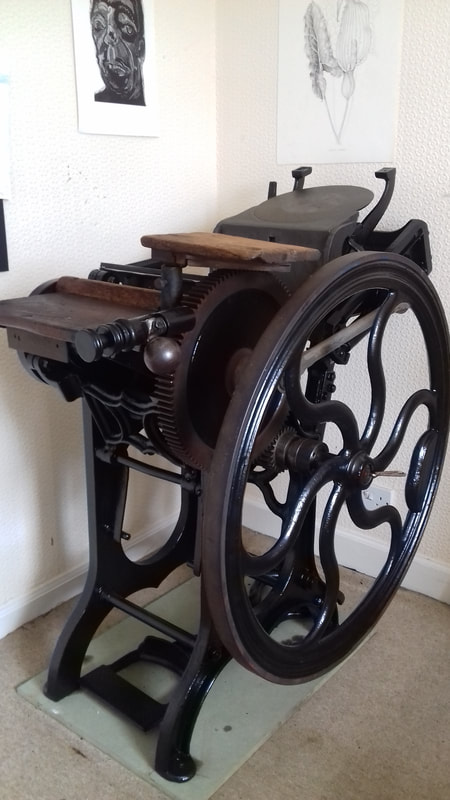